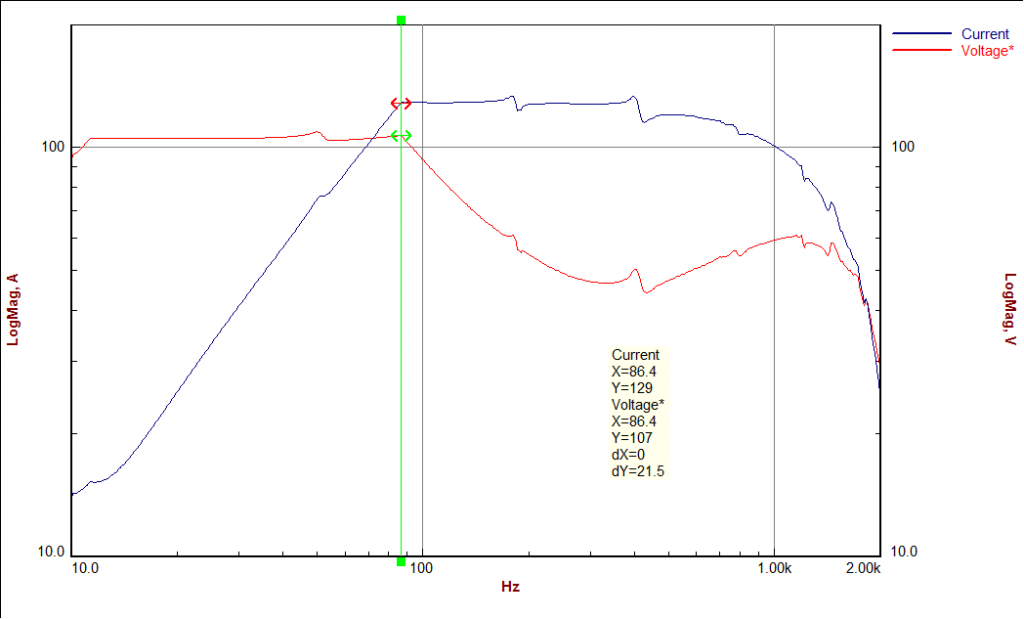 Understanding Voltage/Current Curves and Their Significance

As each shaker is manufactured, Data Physics gathers Voltage vs. Current (VI) curves for that particular model. The VI curves show the voltage and current output from the amplifier to the AC coil, typically recorded at full force bare table.

You can see the Voltage starts at approximately 100V, which is right at the displacement limit of the shaker. The voltage then gradually increases to approximately 105V, which is the velocity limit of 71 inches per second (1.8 m/s). Since Velocity is directly proportional to Voltage, this constant is maintained until you reach the Velocity to Force crossover frequency, which is approximately 80 Hz, at which point the Voltage drops and Current reaches its maximum.

You can see that the Current stays generally constant at approximately 125 Amperes through the entire frequency range of approximately 80-900 Hz, at which time the required current rolls off due to the “free energy” of the system dynamics. Since we have tested this system at maximum force, the maximum current requirement should not change with payload except at the velocity crossover point. In other words, if you were to load a 150 lbs (68 kg) payload or a 250 lbs (113 kg) payload and operate the shaker to its full force output, the required current should remain a constant 125 Amperes.

The only exception to this rule would be at the Velocity to Acceleration cross over point which will shift down significantly due to the payload. However, the curve should look just the same as Figure 1; the only difference would be the point at which the Voltage and Current cross each other.